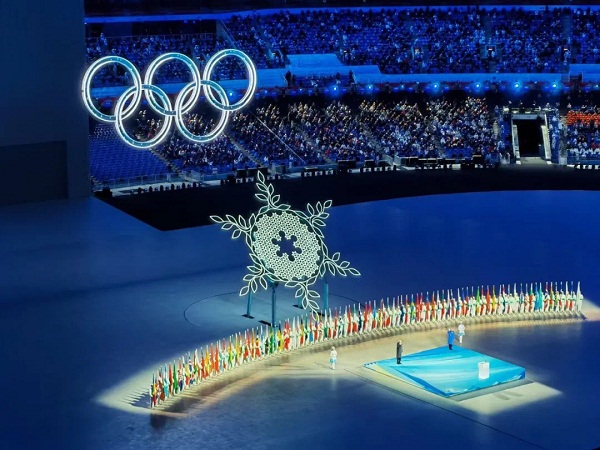 The Olympic ice and snow rings shine at the Olympics thanks to the LED screen manufactured and designed by Guangzhou LEDMAN. [Photo/southcn.com]

During the international event of the 2022 Beijing Winter Olympics, Guangzhou enterprises shone their best inside and outside of the stadium.

During the closing ceremony of the Beijing Winter Olympic Games that was held at the National Stadium on Feb 20, Guangzhou Unilumin worked with BOE to prepare thousands of square meters of LED floor tiles for the National Stadium，closing the distance between the audience and the stadium.

Guangzhou LEDMAN designed and manufactured the LED screen that displayed the wonderful appearance of the five Olympic Rings. The ice and snow rings were one of the most important props for the opening ceremony of this Winter Olympic Games. The sculpture was 19 meters long, 8.75 meters high, and only 35 centimeters thick. The interior was made up of a 360-degree LED screen with no dead angle.

At the National Ski Jumping Center, where eight gold medals were produced, Guangzhou ITC provided sound amplifying equipment to enhance the venue atmosphere and arouse the audience's mood through music and live broadcast.