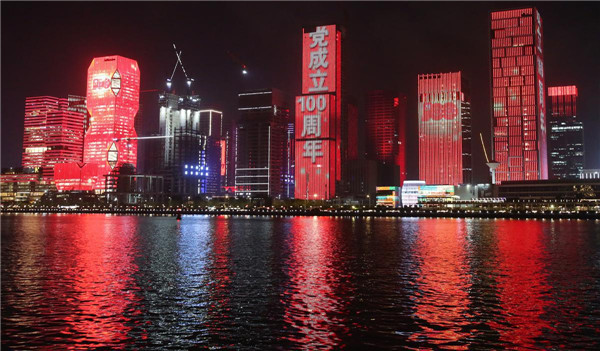 A spectacular red-themed light show has become the latest hot tourist attraction in Guangzhou, Guangdong province, celebrating the 100th anniversary of the founding of the Communist Party of China. It will run until Sunday. [Photo by Zheng Erqi/chinadaily.com.cn]

Crowds of residents and tourists have been attracted every night when the lights decorating the bridges and major buildings — including the city's iconic Canton Tower — are on.

A statement released by the Guangzhou bureau of housing and urban-rural development, the show's sponsor, noted that the lights are on between 7:30 pm and 10:30 pm nightly.

Chen Yunxi, an office worker in Guangzhou's Tianhe district, said the show is really beautiful and helps polish the city's reputation at home and abroad.

The red-themed show, which runs until Sunday, celebrates the 100th anniversary of the founding of the Communist Party of China, which falls on Thursday. The CPC has become a large Party with more than 95 million members and has led the Chinese people to realize national independence, development and prosperity.

The show also reflects the long history, humanity and profound culture of an open and inclusive city whose history spans more than 2,200 years. Guangzhou is today one of China's major transportation hubs and a major commercial center.

The show is expected to help stimulate patriotic enthusiasm and a sense of national honor for local residents and tourists.