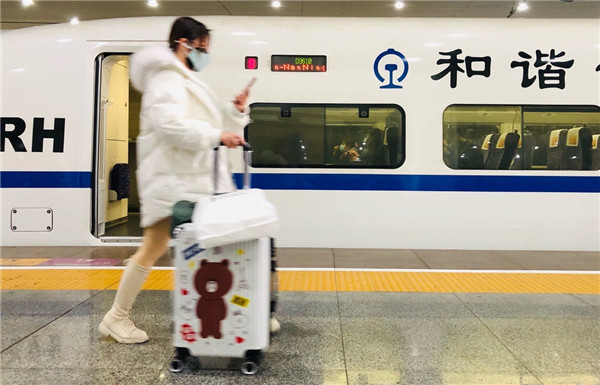 A woman is ready to get on the high-speed train leaving from the Guangzhou South Railway Station to Nanning, the capital of the Guangxi Zhuang autonomous region, on Thursday. [Photo by Qiu Quanlin/chinadaily.com.cn]

The number of passenger trips will be down significantly at railway stations in Guangzhou, the capital of Guangdong province, before the Spring Festival holiday, according to the local railway authorities.

The Guangzhou South Railway Station, one of the busiest stations in passenger flows in South China, is expected to see 6.63 million passenger trips before the holiday, down 19.3 percent year-on-year, according to the railway authority.

However, the number of passenger trips is expected to increase more than two times over that of 2020 to about 12.5 million after the Spring Festival, according to the railway station.

The 40-day travel peak is expected to see around 1.7 billion passenger trips nationwide, up about 10 percent year-on-year, but more than 40 percent lower than that of 2019, according to the Ministry of Transport.

To curb the spread of the coronavirus during the holiday, China has issued a plan to reduce mass gatherings and strengthen epidemic control, by advocating off-peak travel and encouraging people to stay put during the holiday.