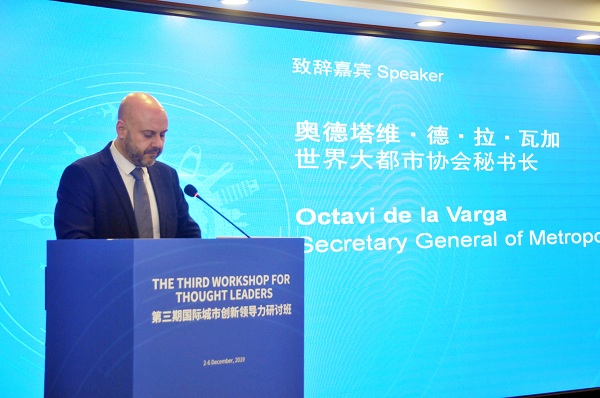 Octavi de la Varga, secretary-general of Metropolis, delivers a speech during the opening ceremony of the Third Workshop for Thought Leaders. [Photo provided to chinadaily.com.cn]

More than 40 representatives from 25 cities in 19 countries and regions are in South China's Guangzhou for the Third Workshop for Thought Leaders. The workshop opened Tuesday and will ends Friday.

The workshop gained support from the World Association of the Major Metropolises (Metropolis), the Asia Pacific Region of the United Cities and Local Governments (UCLG) and the Guangzhou municipal government.

As an important series activity of the Guangzhou International Award for Urban Innovation (Guangzhou Award), the workshop was held in 2015 and 2017, attracting representatives who include government leaders and the leaders of international organizations from dozens of cities involved in the Belt and Road Initiative.

Themed "Urban Regeneration and City Vibrancy", this year's workshop has put the focus on several hot issues spanning the joint management of the Guangdong-Hong Kong-Macao Greater Bay Area and the further development of the Greater Bay Area, as well as boosting Guangzhou's vibrancy.

Pan Jianguo, secretary-general of the CPC Guangzhou municipal committee, said the event is expected to offer a platform for city managers to communicate and exchange experiences and contribute to the upgrade of the global urban management level.

Octavi de la Varga, secretary-general of Metropolis, said Guangzhou, which enjoys a long and rich history, has become a benchmark in urban development. He added that he hopes Guangzhou can share its experience with other cities to provide solutions to the changing development environment.

During the opening ceremony, the Metropolis Regional Secretariat for Asia Pacific was unveiled. Varga said that locating Metropolis's regional secretariat in Guangzhou marks the good relationship between Guangzhou and Metropolis. 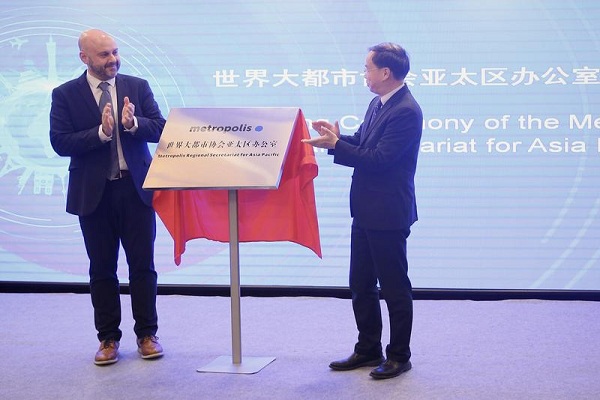 The Metropolis Regional Secretariat for Asia Pacific settles down in Guangzhou on Dec 3.  [Photo by Luo Changwei/Guangzhou Daily]