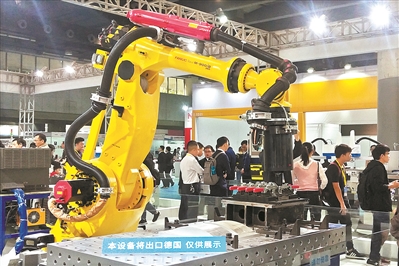 A number of advanced robots from Guangzhou and Guangdong province made their debut during the 2019 China (Guangzhou) International Robot and Intelligent Manufacturing Exhibition (RoboIMEX2019) in Guangzhou, which ran from Nov 30 to Dec 2.

As the most influential exhibition for robots and smart manufacturing in the South China area, RoboIMEX2019 has attracted more than 400 exhibitors from home and abroad, as well as an estimated 100,000 professional attendees.

Songxing Electric, a company set up in 1997 in Guangzhou, brought a robot for the examination of high-speed trains, which is the first of its kind in the world.

Yan Xiaoliang, a staff member from Songxing, said that all high-speed trains used to operate during daytime and undergo examinations by engineers at night, which can be painstaking for engineers, possibly leading to missing inspections.

Currently, the robots have been applied at the Shanghai and Guangzhou railway bureaus. The robots can examine 2,000 monitoring points through big data, ensuring the safety of the train.

The annual production value of the smart equipment and robotics industry in Guangzhou has amounted to 56.7 billion yuan ($8.06 billion), up 6.8 percent year-on-year.

"I believe the robotics industry in Guangzhou and the Greater Bay Area can keep up with the pace of global development and even become a pioneer," added Liu.