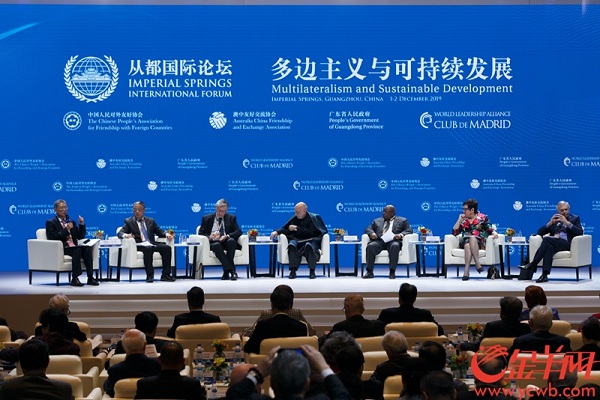 The 2019 Imperial Springs International Forum opened in Guangzhou on Dec 1, gathering more than 260 representatives, including former foreign politicians, former persons in charge of international organizations, entrepreneurs from home and abroad, as well as scholars and experts.

Themed on "Multilateralism and Sustainable Development," the forum was founded in 2014 and co-organized by the Chinese People's Association for Friendship with Foreign Countries, the Australia China Friendship and Exchange Association, the People's Government of Guangdong Province, and the World Leadership Alliance-Club de Madrid.

It is expected that the forum can push forward communication and recognition between China and the whole world to promote regional and global cooperation.

"The huge changes happening in China make me realize that not every country can use the same system to govern. The governance system should be made depending on the actual situations," said Neil Bush, son of George H.W. Bush, former president of the United States. 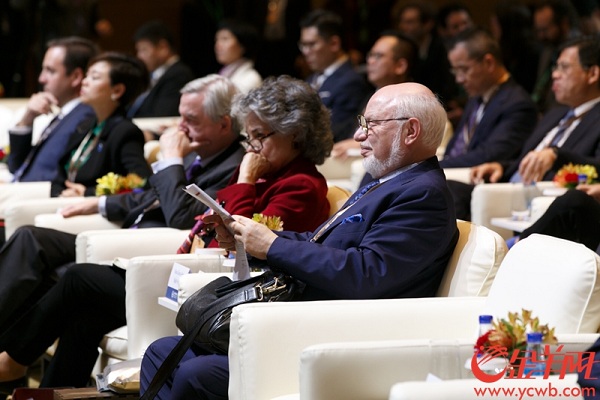 The forum attracts more than 260 representatives with international influence to attend. [Photo/ycwb.com]

The Belt and Road Initiative, another hot issue, was also discussed during the forum.

"The BRI has not only built connections between China and Afghanistan, but also established closer relationships among Afghanistan and its neighboring countries. As far as I know, a lot of countries are hoping to join the BRI," said Hamid Karzai, former president of Afghanistan.

A face-to-face lunch session was set up during this year's forum for the first time, inviting guests, such as the person in charge of the National Development and Reform Commission, to better introduce the latest development achievements in China and Guangdong province.

Jenny Shipley, former prime minster of New Zealand, said that the Guangdong-Hong Kong-Macao Greater Bay Area is filled with development opportunities for New Zealand and that she believed that the Greater Bay Area will be the hub for deeper communication and cooperation between China and international society.