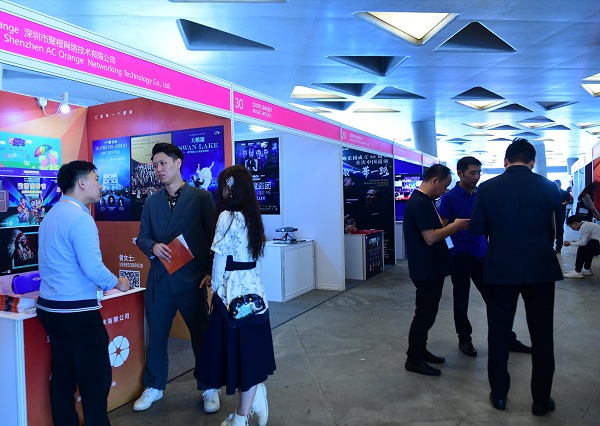 More than 300 stage and tourism performing agencies from 30 countries and regions participate in this year's fair. [Photo by Qiao Junwei/dayoo.com]

The 10th China (Guangzhou) International Performing Arts Fair and the first Silk Road International League of the Theaters Fair for Tourism, Performance and Investment opened on Nov 25 in Guangzhou.

After 10 years of development, the fair has grown into a leading brand in China's performing arts industry and has bolstered the growth of Guangzhou's performing arts market. In 2018, about 200 cultural agencies from 38 countries and regions attended the fair, with the trade volume reaching 300 million yuan ($42.47 million) last year.

"This year's event is aimed to bring performing arts close to audiences and promote the influence of Lingnan culture, as well as the international competitiveness of Guangzhou's cultural brand," said a person in charge of the Guangzhou bureau of culture, tourism, radio, and television.

Brad Little, star of world famous musicals including Phantom of the Opera and Les Miserables, has participated in the fair four times.

Little said that Guangzhou audiences greatly enjoy performing arts and that he really enjoys performing in the city.

"The fair has become a new stage for the communication and trade between overseas and domestic art performances. I believe the scale of the fair will be bigger in the future and the relationship between partners will be closer," said Li Jinsheng, chairman of China Arts and Entertainment Group Ltd.