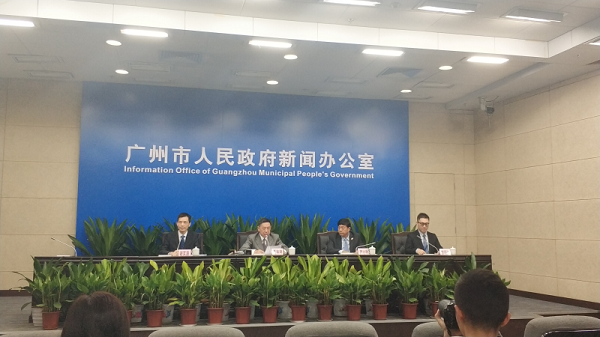 The information office of Guangzhou municipal people's government holds a news conference on Nov 19, announcing that the International Finance Forum (IFF) 2019 Annual Conference (F20 Summit) is scheduled to take place in Guangzhou from Nov 22 to 24. [Photo by Wu Yulun/southcn.com]

The International Finance Forum (IFF) 2019 Annual Conference (F20 Summit) is scheduled to take place in Guangzhou from Nov 22 to 24, according to an announcement made during the press conference held by the information office of Guangzhou municipal people's government on Nov 19.

IFF, also known as Finance 20, is a non-profit and non-official independent international organization headquartered in China, as well as an international financial public platform and a strategic think-tank.

The annual conference of IFF, first held in 2003, has attracted more than 1,000 leaders, experts, and scholars in areas spanning politics, economics, and finance from home and abroad to give lectures.

Nie Linkun, deputy director of the Guangzhou local financial supervision and administration bureau, said that holding the annual conference of IFF will bring important opportunities for Guangdong and China to better participate in international financial cooperation and development. It is also a good chance to showcase Guangzhou's city image and financial strength.

Nie added that since the event was first held in 2007, it has become an important platform for Guangzhou to attract global high-end financial resources and elements.

Guangzhou's Nansha district has launched an international competition with IFF for its permanent venue and two of them have been selected to wait for further approval.

By the end of September 2019, Nansha has clustered 6,497 financial and quasi-financial enterprises, up 52 times than that before the unveiling of the Nansha area of the Guangdong Pilot Free Trade.