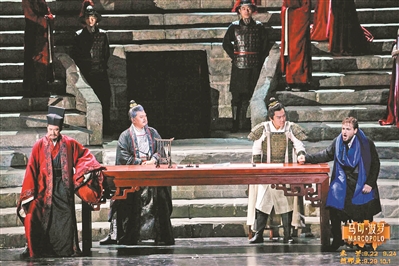 The main cast of Marco Polo consists of people from around the world with a variety of cultural backgrounds. [Photo/Xinhua]

The original Chinese opera Marco Polo, created by the Guangzhou Opera House and based on the story of the famous Italian explorer, has been well-received by local audiences and media during its tour in Italy.

Marco Polo, first staged in May 2018 in Guangzhou, was shown at the Dal Verme Theater in Milan on Sep 22 and 24 and at the Carlo Felice Theater in Genoa from Sep 29 to Oct 1.

It is a three-act Chinese opera running 165 minutes, and its main cast consists of people from around the world with a variety of cultural backgrounds.

The opera recounts the epic adventures of Marco Polo, who traveled along the ancient Silk Road to China in the 13th century. It was meant to celebrate the 50th anniversary of the establishment of diplomatic ties between Italy and China.

"Italian audiences are very familiar with both opera and the story of Marco Polo. The opera is a good way to showcase China's cultural strength as it was created in Guangzhou and presented by artists from home and abroad," said Wang Bingbing, a Chinese opera performer living in Italy.

Giuseppe Talamo, an Italian tenor who stars as Marco Polo in the opera, said he was happy to be able to perform the opera in his homeland.

"I hope more Italian artists can perform in China to improve cultural exchanges between the two countries, just like Marco Polo," added Talamo. 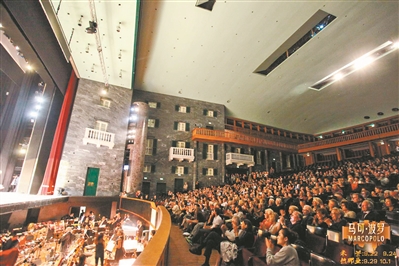 Marco Polo, created by the Guangzhou Opera House, is well-received by local audiences and media during its tour in Italy. [Photo/Xinhua]