Ship-building companies in the southern port city of Guangzhou are acquiring a wide range of cutting-edge technologies which are expected to give them a competitive edge in the international market and significantly boost China's ship-building industry.

In early spring last year, Audax, an LNG transportation vessel weighing over 28,000 tons, arrived in Sabbetta Port, north of the Arctic circle, after a two-week-long voyage which saw the ship braving treacherous visual conditions and temperatures as low as minus 40 degrees Celsius. The energy-efficient, high performance vessel was built by Guangzhou Shipyard International Company Limited (GSI) and is the world's first polar-region heavy load carrier. Equipped with advanced anti-freezing technology, it can reach speeds of 3.7 kilometers per hour while travelling through ice as thick as 1.5 meters. 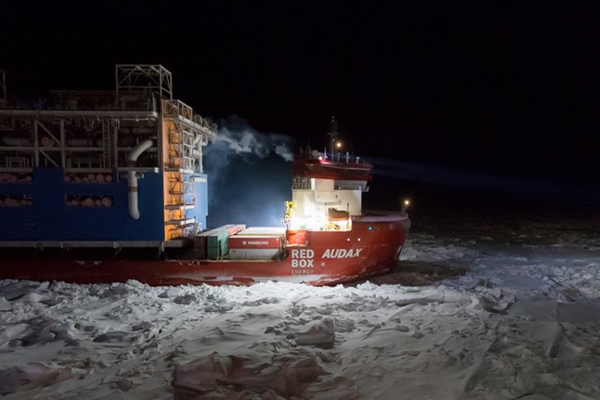 Audax, an LNG transportation vessel built by GSI, travels through the Arctic in pitch-black conditions. [Photo/southcn.com]

The launch of the 38,800-ton iDolphin, the world's first smart bulk carrier, at the 2017 Marintec China exhibition in Shanghai last December once again attracted worldwide attention. The ship was built by Guangzhou-based CSSC Huangpu Wenchong Shipbuilding Company Limited and features a special navigation system and smart operation and maintenance system which make the ship safer, greener and more efficient.

Other notable ships built in Guangzhou include the Xin Guang Hua, the largest semi-submerged ship in Asia and the Thjelvar, the world's fastest luxury ro-ro passenger ship which cost more than 1 billion yuan ($160 million) to make. These new state-of-the-art vessels reflect the rapid development of Guangzhou's ship-building industry, with its newfound focus on quality, efficiency and smart manufacturing. 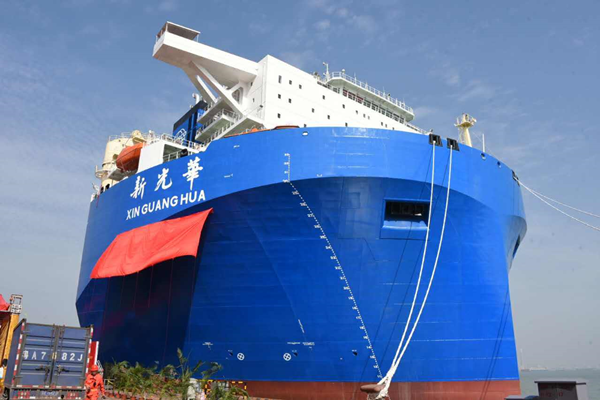 "Advanced technology is the result of innovation and talent, and the recent breakthroughs experienced by Guangzhou's shipbuilding industry are entirely thanks to researchers and personnel who have dedicated their lives to the development of science and technology", said Chen.

"I once heard about an engineer who spent decades researching ships and never even set foot in a Guangzhou shopping mall. This deeply moved me," he said. The dedication of individuals such as this have an immeasurable impact on Guangzhou's ship-building industry. One Guangzhou-based shipyard, CSSC Huangpu Wenchong Shipbuilding Company, applied for nearly 400 patents in 2017.

The improved quality and performance of Guangzhou-made vessels has helped the city gain an ever-increasing international market share.

Last December, a 261,000-ton ore carrier built by GSI for Australia's Fortescue Metals Group Ltd (FMG) was assigned the name Matilda. According to Elizabeth Gaines, CEO of FMG, the company has ordered a total of four ships from GSI, citing their reliability and technological capability. 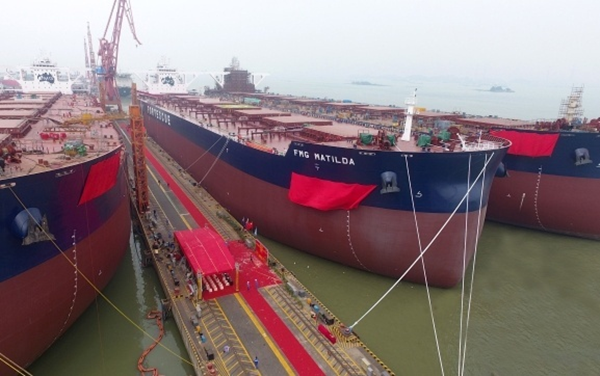 A ceremony is held in Guangzhou to celebrate the launch of Matilda, a 261,000-ton ore carrier built by GSI for FMG. [Photo/southcn.com]

In 2017, GSI completed construction on 31 client vessels, with 18 of them being built in its Nansha factory, while CSSC Huangpu Wenchong Shipbuilding Company completed 35 ships worth 12.4 billion yuan.

Despite excess capacity in China's ship-building industry, Guangzhou still stands out among its competitors due to flourishing offshore oil and wind power markets, as well as several large-scale bridge projects.

Guangzhou is home to two thirds of shipyards in Guangdong province and, according to Chen, the city will seek to further bolster its position through development of more high-end industries such as ship maintenance, shipping finance, and tour cruises. Chen also noted that ship-building companies should solidify themselves as developers of new technology, as smart manufacturing is the undeniable future of the industry.