On Jan 17, LG Chem, a subsidiary of the world renowned South Korean conglomerate LG Corporation, announced plans to set up a polarizer plant in Guangzhou to promote growth in its high-tech business sector.

A polarizer refers to an optical filter that light waves of a specific polarization pass while filtering out light waves of other polarizations. Polarizers are used in many optical technologies and instruments, and are a key raw material for liquid crystal display (LCD) panels.

The project that is to be in Huangpu district, will be the first one of its kind in the South China region and will likely bring a different dynamic to Guangzhou's IAB industries, which refers to the next generation of information technology, artificial intelligence and biological medicine industries.

This was not the only announcement that the conglomerate has made in recent times regarding Guangzhou, as early in December last year, LG Display Co, one of the world's biggest display panel manufacturers, another subsidiary of LG Corporation, announced its plans to invest 5 trillion won ($4.7 billion) to construct an OLED (organic light-emitting diode) panel production plant in Guangzhou.

These projects will help build Guangzhou into world class display panel production hub and will also shape Guangzhou's tremendous IAB industry layout which has a scale of over one trillion yuan ($156 billion), according to Hong Qian, deputy head of Huangpu district. 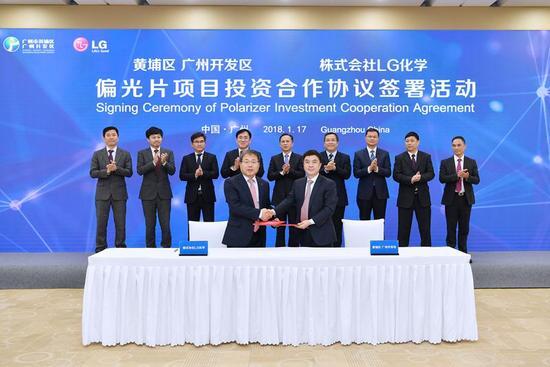 LG Chem signs a cooperation agreement with Huangpu district on Jan 17 to set up a polarizer plant. [Photo provided to chinadaily.com.cn]