The government's emphasis on innovation has given rise to a swift transformation for the millennial trade hub of Guangzhou to become a city with cutting-edge technologies and an influx of investment from world leading industries.

The Guangdong province capital and birthplace of the ancient Maritime Silk Road is projected to become one of the global leading players in the sectors of next-generation information technology, artificial intelligence and bio-medicine, or IAB. 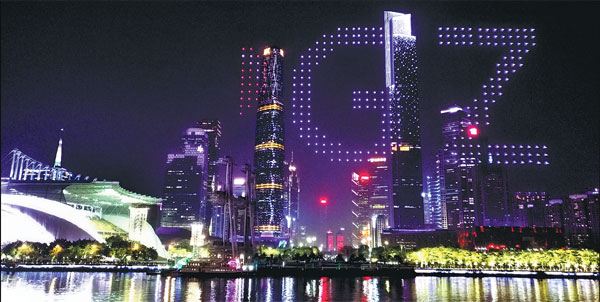 "We are working on a five-year guideline for the IAB industries of Guangzhou from 2018 to 2022, which will further fuel the momentum of the industries," said Mayor Wen Guohui.

The annual industrial output of IAB is projected to surpass 1 trillion yuan ($155.5 billion) by the end of 2022, when industrial clusters will take a lead in China and have global influence, Wen said.

The city will provide preferential policies in areas of funding, human resources and land subsidies to make sure the mission is fulfilled, the mayor added.

Three governmental departments, - Guangzhou Development and Reform Commission, Guangzhou Industry and Information Technology Commission and Guangzhou Science Technology and Innovation Commission - will allocate no less than a 1 billion yuan annual fiscal fund each to support IAB industries. The city will specially set up a reward system in the existing talent policies to attract top professionals in the IAB sector to work in Guangzhou. In terms of land, which is always in short supply, the mayor said the city will arrange at least 5,000 mu (333.3 hectares) each year to satisfy the needs of IAB development.

In fact, the IAB industries recorded a remarkable 10 percent year-on-year growth in 2017, with total revenue estimated at 520 billion yuan although the official figure has not been yet released.

In the first half of 2017, a total of 24 IAB projects settled in Guangzhou, with accumulative funds of nearly 100 billion yuan involved. One of the highlight projects was the establishment of the world's largest 8k-resolution panel factory by Sakai Display Products Corp, a subsidiary of multinational electronics manufacturing contractor Foxconn Technology Group in Guangzhou's Zengcheng district.

"Guangzhou is at the right timing to develop IAB," said Wang Xiaodong, co-founder of BeiGene and a foreign academician of the China Academy of Sciences.

Providing an excellent base for the development of the bio-medicine industry, Guangzhou has the advantages of having a big potential market, low costs, rich human resources, established innovative systems, efficient government services, and open and tolerant communities, Wang said. According to the city's blueprint, it will develop 10 value parks in different districts, which will be varied and complementary in terms of development directions.

For example, Haizhu district will focus on the internet industry while Zengcheng will have an emphasis on new-generation displays.

Tianhe will develop software, Panyu will establish a smart city and develop new energy vehicles and Nansha will focus on AI.

"Guangzhou is at a critical time, when traditional industries slow down and become weak while emerging industries are still at the beginning stage and many new projects are under construction," Wen said.

"It will take one or two years for the new industries to develop and generate sizable output. At that time the quality and quantity of Guangzhou's economy will make big strides," the mayor noted.