Guangzhou Baiyunshan Pharmaceutical Holdings announced on Jan 1 that a new chemical synthetic drug independently developed by the company and used to treat pneumonia has received clinical test permission from the China Food and Drug Administration (CFDA).

The antibiotic medicine Ceftriamidine Sodium, has become the only new cephalosporin compound to be approved by the CFDA in the past 20 years.

The drug features hypo-toxicity, high stability and is effective to drug-resistant streptococcus pneumonia.

After getting permission for clinical testing, the new drug will be used in trials; once passed the trials, it will be produced and enter the market, according to Pei Zejian, head of Guangzhou Baiyunshan Pharmaceutical General Factory.

Compared to generic medicine, chemical synthetic drugs researched independently always take a longer time and have greater risks. From applying for clinical testing to receiving permission to enter the market, it can take as long as five to 10 years with the time spent on waiting for government reviews accounting half of the whole process.

"The government's efficiency has improved significantly," said Pei, noting that it took only half a year for the company to receive permission after applying for clinical testing.

Pei said that Guangzhou has been working hard to encourage the research and development of new drugs and open green channels for innovative medicine to speed up government reviews. 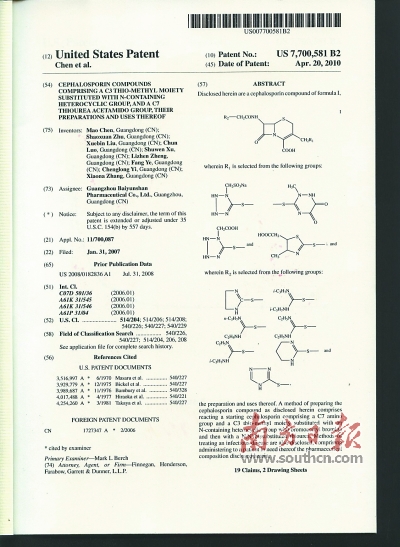 The patent of Ceftriamidine Sodium is issued by the United States Patent and Trademark Office in 2010. [Photo/southcn.com]

Guangzhou is pressing ahead with its IAB initiative, which focuses on developing emerging industries of the next generation of information technology, artificial intelligence and biological medicine.

The drug companies in the city are investing big on new medicine R&D. Taking Guangzhou Baiyunshan Pharmaceutical Holdings as an example, the company has been working on a total of 13 chemical synthetic drugs including anti-tumor biological medicine and vaccines.