Guangzhou has entered a new stage of growth in the biopharmaceutical industry, as the number of industrial parks there have continued to mushroom in recent years.

It enjoys a series of incentives from the Guangzhou city government, including an investment fund and comprehensive infrastructure for starting businesses, which are designed to attract companies from both China and abroad.

Guangzhou-based King-Med Diagnostics, a third-party company engaged in medical testing established in 1994 in the area, is one of the earliest commercial clinical laboratories in China.

As a representative company in the area, the company now provides more than 2,400 types of clinical tests and scientific research for healthcare institutions nationwide.

The South China Research Center for Stem Cell and Regenerative Medicine is a biomedical research institution in the area funded by Guangdong province, Guangzhou city and Guangzhou Development District.

The center conducts research and development for techniques and products in stem cells and organ regeneration, and develops medicines.

It is expected that by 2020, the area will be home to a total of 300 major biomedical projects and the total annual output will reach 8 billion yuan ($1.25 billion).

Officials said that in order to create a better living and working environment for local businesspeople, employees and residents, the area's administration body injected a total of 9.35 billion yuan into fixed-asset investments - to support construction of streets, plants, green parks, water and electricity supply systems as well as rubbish and sewage disposal facilities.

In July, General Electric announced it will launch an $800-million bio-industry park in the Sino-Singapore Guangzhou Knowledge City in Guangzhou Development District.

Once completed, the project is expected to have an output value of more than $4 billion, which will give a big boost to Guangzhou's biopharmaceutical industry, according to the company.

"The GE bio-industry park is an unprecedented step for GE to explore cooperation with the government of Guangzhou in the field of biomedicines," said GE China CEO Duan Xiaoying.

"We hope that through sharing resources and complementary advantages, the park can be built into a world-class biopharmaceutical ecosystem."

To date, the city's biopharma enterprises have formed an industrial chain extending to R&D, genetic engineering and production, as well as sales of medicines, equipment and reagents. 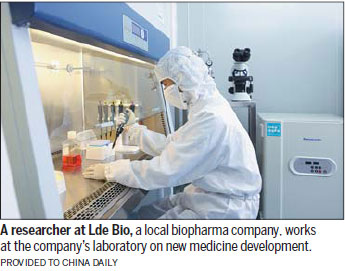