The concept of the smart ship revolves around the idea that the vessel is able to perceive and think for itself. Costing 200 million yuan ($30 million), the 38,800-ton bulk carrier is distinctive with its intelligent operation and maintenance system serving as its brain.

The system is divided into three parts, intelligent navigation, cabin and energy efficiency management. The intelligent navigation system is preinstalled with more than 110 data analysis models, which can calculate and analyze different ship conditions, marine environment and navigation information. The system will be used to choose the most suitable route for the ship to save the time and reduce the cost.

Equipped with 500 sensors, the ship will constantly collect all kinds of information in the process of navigation to enrich its database. According to the ship builder, the platform can be installed on other vessels to form a sharing network

The intelligent cabin can keep personnel on board informed of the state of ship equipment and sound warnings before there are any issues on the ship. The cabin also provides solutions to any problems, reducing failure rates down to almost zero.

As for the intelligent energy efficiency system, it can conduct real-time monitoring and analysis of the ship's energy consumption and the condition of its equipment. Based on the data analysis of energy efficiency, the ship can adopt an optimized shipping route. Compared with ordinary ships, Great Smart has an increased efficiency of about three percent and reduced fuel consumption by six percent daily.

Relying on the intelligent system, the ship only needs one staff member to stay on the console cabinet, where at least three were needed in the past, including one captain and two sailors. 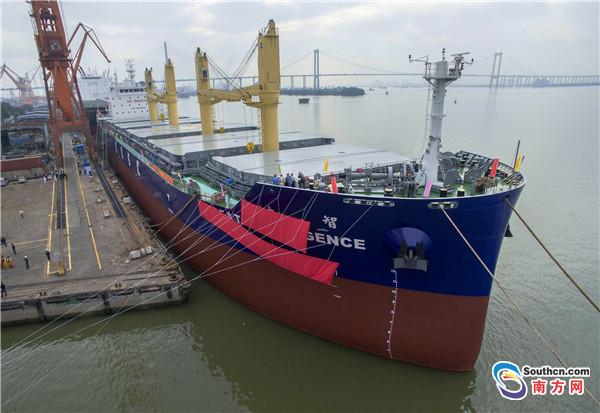