The 2017 Fortune Global Forum, a great occasion for economic experts, government officials and senior officials of the world's leading companies to speak on the development and innovation, is due to be held in Guangzhou from Dec 6 to 8, and the southern Chinese city will surely take this opportunity to fully present itself to the world.

Over the past one year, the city has been pressing ahead and promoting its IAB industries, namely referring to the next generation of information technology, artificial intelligence and biological medicine. Global business magnates as well as major state-owned enterprises are seeking business opportunities in the IAB industries in Guangzhou, forming it into a strong riptide to drive Guangzhou into world innovation hub, changing Guangzhou International Bio Island into an R&D base for high-end biopharmaceuticals and Nansha into a highland for artificial intelligence.

A batch of leading IAB projects of companies such as Foxconn, Cisco, GE, BeiGene, AsiaInfo and GAC have broken grounds since January this year. The investment amount of five projects has reached 40 billion yuan ($6.1 billion). Guangzhou has also wowed its global investors with its amazing "Guangzhou Speed" by cutting down red tapes and facilitating the projects to settle down. 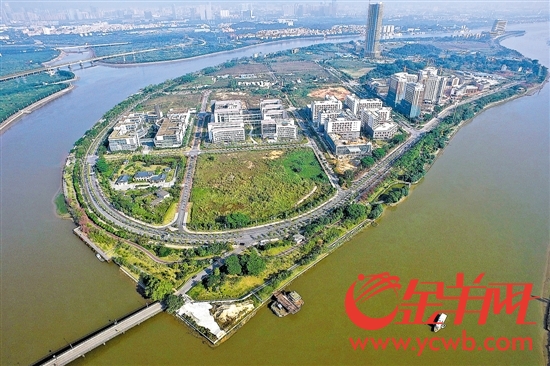 Guangzhou is also formulating a five-year action plan (2017-21) and striving to make the output value of its IAB industries hit one trillion yuan by 2021. The plan was revealed at a press conference on August 2 on Guangzhou becoming a pilot city for the nation's "Made in China 2025" strategy.

According to Hu Gang, a professor from the School of Public Administration and Emergency management of Jinan University, the direction of developing IAB industries in Guangzhou is based on reality and Guangzhou boasts such industrial foundations, for example, the biological medicine industry, the city has strong back-up force from Guangzhou Pharmaceutical Holdings and Zhongshan School of Medicine at Sun Yat-sen University.