A Guangzhou-made scientific research ship was delivered to Xiamen University on March 29 to serve as a deep-sea exploration vessel.

The ship, named Jiageng, was developed by Guangzhou Shipyard International. The 77.7-meter-long vessel is capable of accommodating more than 50 people and houses first-class facilities for research and experimentation. Its maximum speed exceeds 14 knots (14 nautical miles per hour). 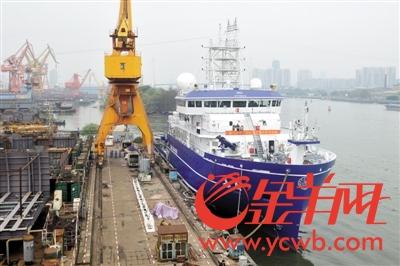 A Guangzhou-made scientific research ship is delivered to Xiamen University on March 29. [Photo by Lin Guiyan/ycwb.com]

According to project leader Cai Ruimou, being quiet is the most distinctive feature of the vessel. It has become China's first ship to meet the Silent A+S noise class notation developed by international consulting firm Det Norske Veritas (DNV).

"That is, our ship will not even wake a sleeping fish," said Cai, "there are no more than 20 ships of this level in the world."

To carry out high-precision deep-sea investigations, the ship is equipped with a flipper fitted with many detectors. Transducers and probes for landform scanning have also been installed on bottom of the ship.

Cai revealed that as the ship can travel on all ice-free seas. Maritime surveys, teaching and project implementations will heavily rely on it.