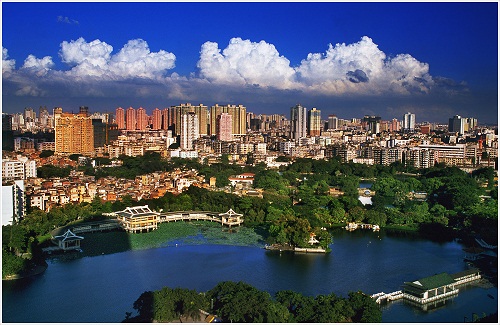 Liwan district is located in west Guangzhou where two other rivers merge with the Pearl River. [Photo/lw.gov.cn]

As the cradle of Lingnan (Southern China) Culture, Liwan district is a significant point on the so-called Silk Road on the Sea.

Liwan district is located in west Guangzhou where two other rivers merge with the Pearl River. Since the district resided outside the west gate of ancient Guangzhou city, it was nicknamed as Xiguan (xi means west and guan means gate). Having integrated with the former Fangcun district, Liwan district presently covers 62.54 square kilometers, with a population of 710,000.

Due to the unique geographic environment, great Xiguan Culture and unique folk customs have developed over the past 2000 years. As a typical representative of the Lingnan Culture, Xiguan culture combines ancient and modern civilizations and integrates western culture with eastern culture. Traditional buildings like Xiguan residences, Qilou, temples and shrines, and western style buildings on Shamian Island are scattered throughout this district.

Liwan district is also the birthplace of Cantonese Opera, Lingnan literature and Lingnan style paintings. The unique catering and traditional Chinese medicines in Xiguan are famous at home and abroad. People living in Xiguan enjoy collecting antiques which are available for tourists from home and abroad at the Xiguan Antique City (Xiguan Gu Wan Cheng) and Antique Street (Yuansheng Tao Ci Gong Yi Jie). Folk customs, including lion dances, are still passed down from one generation to another.

Since ancient times, Liwan district has been one of the prosperous business zones in Guangzhou. Early in the Ming Dynasty (1368-1644), it became a major port for promoting trade with foreign countries. For over 100 years in the Qing Dynasty (1644-1911), it was the site of the famed foreign trade port, Thirteen Hongs, and the only region in China where foreign trade was permitted. At present, there are three business zones located on Shang-xia-jiu Shopping Street, Kangwang Lu and Zhongshan Qi Lu/Zhongshan Ba Lu.