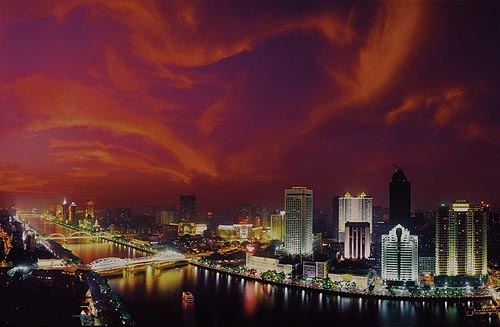 Yuexiu district, located in the middle of Guangzhou, is the area where the original city came into being. [Photo/yuexiu.gov.cn]

Having incorporated the former Dongshan district in April 2005, the present Yuexiu district covers 33.82 square kilometers with a population of over 1,100,000.

Located in the middle of Guangzhou, the Yuexiu district is the area where the original city came into being. As a result, it was an historic political center, and earlier in the Qin Dynasty (221 BC–206 BC) it was the capital of the Nanhai Prefecture. In the Western Han Dynasty (206 BC-8 AD), the area was an administrative center built by Zhao Tuo, king of the Nanyue Kingdom.

Yuexiu district is also a cultural center in Guangzhou, the point from which Lingnan culture has spread. In history, many famous men of letters have worked or lived in this district. The district, therefore, boasts many sites of classic learning academies, private schools and other seats of learning. Thanks to its long history and rich culture, there are many scenic places and historical sites, including Guangxiao Temple, the Zhenghai Building, Wuxian Taoist Temple, remnants of the city wall dating from the Ming Dynasty, the Sun Yat-sen Memorial Hall and the Tomb of 72 Martyrs at Huanghuagang.

Additionally, Yuexiu district is a prosperous business zone. In ancient times Guangzhou was the first city in China opened to foreign trade. And here too, the Chinese Export Commodities Fair is held every Spring and Autumn.

Since the initiation of the Reform and Opening-Up period, the economy in this district has experienced rapid development. The area spanning Beijing Lu and Zhongshan Wu Lu is the busiest commercial center with rich tourist resources. The international CBD located on Huanshi Dong Lu attracts lots of capital and enterprises engaged in logistics and information services. Compared with other districts, Yuexiu district boasts the strongest economy.