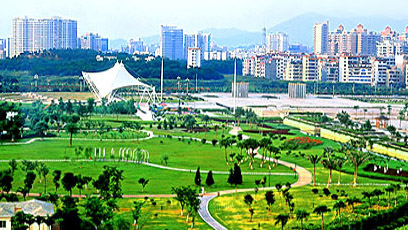 Zengcheng is located to the east of Guangzhou. It is called the "Golden Aisle" linking Hong Kong, Shenzhen and Guangzhou. Zengcheng was established in 201 A.D. and boasts a history of over 1,800 years. The climate here is mild and it is known as the hometown of lichee, fish and rice. The area boasts many attractive features and there are green mountains and clear waters with beautiful landscapes all around. Forests cover 48% of the area hosting forest parks and nature reserves such as Jiaoshiling, Dafengmen and Nanxiang Mountains. It is the "Green Lung" of east Guangzhou and also an oasis of nature in the greater economic circle of the Pearl River Delta.

Zengcheng has abundant tourism resources. The Provincial Level Baishuizhai Tourist Resort is a new Eco-Tourism location in the Pearl River Delta. The old Hexiangu Temple (dedicated to a Fairy lady surnamed "He"), the Panlong Rattan, the Gualv Seed Lichee Tree in Xiyuan, the Ancient Sea Cave, Zhengguo Temple of Buddhism and other famous spots and relics are housed within the district.

Zengcheng is close to well-developed regions such as the Guangzhou Economic and Technological Development district, Huangpu district and Dongguan City. It has a solid industrial foundation. It hosts pillar industries such as automobiles, motorcycles and accessories, jeans, sportswear and fine chemicals. It is especially known for clustering the automobile, motorcycle, IT and other high-tech industries all of which are growing. Its jeans and sportswear output accounts for more than 50% of the total national output.

Zengcheng is energetic in the modern development of urban agriculture of which the main production base is vegetables, fruits, various varieties of fowl and birds and fresh goods, the majority of which are shipped to Guangzhou and the Pearl River Delta region. It has fostered an agricultural development model of "companies and bases, plus farmers". Gualv Lichees have long enjoyed a reputation for their quality and Simiao Rice has long been famed as "the Jade of Rice".

With the advance of Guangzhou's strategy for developing the city´s eastern areas, Zengcheng has been designated as one of nine key development districts in Guangzhou. It will be built into a comprehensive industrial base, regional modern logistics center, eco-tourism resort and a model of modern urban agricultural production, eventually becoming a modernized urban area in east Guangzhou.