At the ongoing 131st Canton Fair, purchasers from South American enterprises have said that holding China's largest trade fair through an online platform due to COVID-19 prevention and control measures has been admirable.

Salgado is the general manager of Imega Ventus Spa, a Chilean enterprise mainly engaged in the sales of food machinery and household electrical appliances in South America. For his job, Salgado often travels around the world for on-site meetings and product purchases.

He said that the Canton Fair is a great platform for purchasing, noting that the fair not only boasts a wide variety of products and that Chinese suppliers can also provide purchasers with a wide array of solutions.

Since attending the Canton Fair in 2006 for the first time, Salgado has become a regular visitor to the biannual event.

"I attend the Canton Fair at least once a year. This international trade platform is not only trustworthy and brings unlimited business opportunities to the company, but also brings me many opportunities to meet new Chinese suppliers," he said.

"At the fair, I meet with Chinese partners to discuss market trends and new product development, which has established a deep friendship between us."

Salgado said he is trusting and grateful to the Chinese partners he met through the Canton Fair. He added that these relationships have deepened due to the help that Chinese partners have provided him during the COVID-19 pandemic.

In 2020, the products ordered by Nicolas in other countries could not be produced due to the impact of the COVID-19 pandemic. However, his partners in China not only provided the products he ordered in time but also undertook his orders of products that he transferred from other producers in other countries, which enabled his company to meet its urgent needs and freed it from violating their business contracts.

"I was also worried about the production capacity of Chinese enterprises at that time. The economies of most countries in the world were shut down due to the pandemic. As a country with a large population, I asked myself, 'could China control the pandemic and restore normal work production?' However, my Chinese partners completely dispelled my doubts with an online demonstration at the Canton Fair."

Through the online demonstration, he saw the COVID-19 prevention and control capabilities of the Chinese government, as well as the strong production and R&D abilities of Chinese companies, which made him very relieved.

"China and Chile have maintained friendly and cooperative relations for a long time, and every time I come to China, I have a good experience," he said. "Due to the pandemic, global economic recovery has slowed down. However, this online Canton Fair has played an important role in injecting new energy into the global economic recovery."

In the future, he expressed hope that the online demonstration platform of the Canton Fair can add Spanish as a new language so that he can better communicate with exhibitors. At the same time, he also said that he looks forward to participating in the Canton Fair offline again so that he can communicate face-to-face with Chinese partners and plan for the future together.

China's performance in fighting the COVID-19 has caught the world's attention and the Canton Fair has not been interrupted, which not only demonstrates China's confidence and determination in expanding its opening up but also injects vitality into international trade cooperation and world economic development. 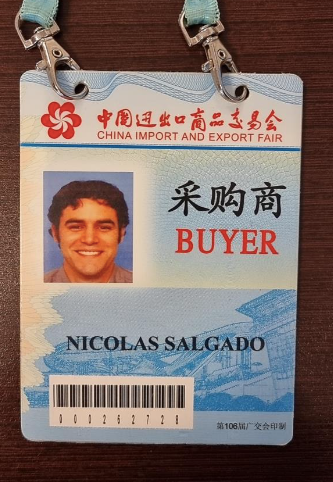 After 16 years, Salgado continues to keep the blue card he used to participate in the Canton Fair for the first time. [Photo/WeChat account: GZWS411665430]