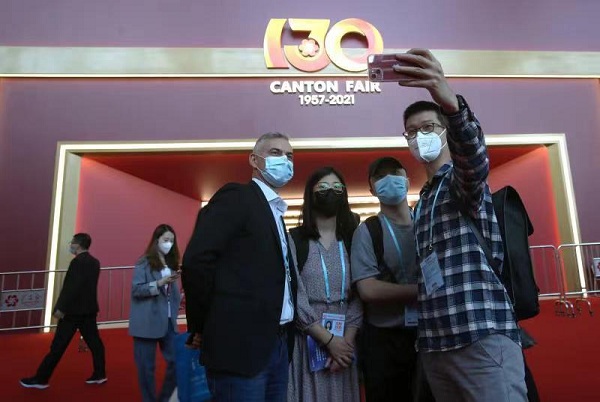 The 130th China Import and Export Fair wrapped up in Guangzhou, Guangdong province on Tuesday, after attracting more than 600,000 visitors from around the world both in person and online. [Photo by Zheng Erqi /chinadaily.com.cn]

The 130th China Import and Export Fair concluded in Guangzhou, Guangdong province, on Tuesday after attracting more than 600,000 visitors from around the world.

In-person attendance resumed after being suspended for three sessions as a result of the COVID-19 pandemic, which started last year.

About 8,000 domestic and foreign companies displayed their latest products and technology in an exhibition area of 400,000 square meters, with 51 exhibition zones. An additional 26,000 firms exhibited their technologies, goods and services online in search of Sino-foreign cooperation and exchanges and an increased presence in world markets.

Meanwhile, the Pearl River International Trade Forum, a State-level event, was held for the first time to further expand the fair's influence.

The fair, which is held twice a year in Guangzhou, is the largest trade event and the one with the longest history in the country. During the fair, China sold more than $1.4 trillion worth of products abroad, playing a big part in the country's reform and opening-up drive and promoting its foreign trade industry.

The import-export fair was jointly organized by the Ministry of Commerce and the Guangdong provincial government. It was first held in 1957.