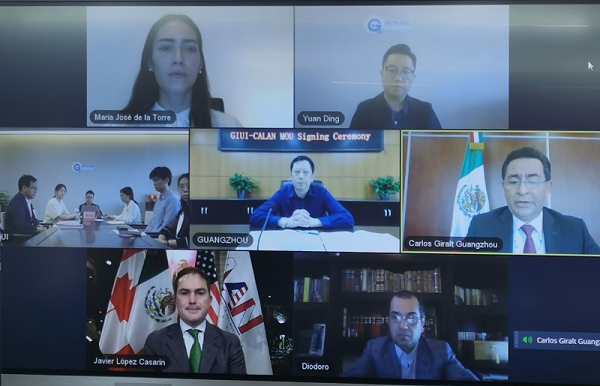 The online signing ceremony gets underway. [Photo provided to chinadaily.com.cn]

The Guangzhou Institute for Urban Innovation, or GIUI – based in Guangzhou on April 22 signed a memorandum of understanding with CALAN to establish a strategic relationship with an umbrella organization representing a slew of cities in North America.

CALAN -- set up by Mexico City, capital of Mexico in 2019 -- is a friendly cooperation organization for cities in North America, with the aim of strengthening the role of local governments and solving common problems in urban development.

Meanwhile, the GIUI was set up in 2013 under the framework of the Guangzhou International Award for Urban Innovation. Its aim is to establish a global urban innovation system, promote friendly communications and cooperation among global cities and boost the harmonious development of cities around the world.

Carlos Ignacio Giralt Cabrales, the Mexican consul general in Guangzhou, said that Guangzhou has been playing an active role in multilateral exchanges with other cities and has formed a deep friendship with Mexico City, providing it with a lot of informative cases and experiences in urban innovation.