A concert hosted by parties including the information office of Guangzhou municipal people's government was held at Xinghai Concert Hall on Jan 10.

Concert attendees included musicians, medical experts and vloggers from all over the world. They came to showcase the precious friendship between China and foreign countries, in mutual exchanges and in the fight against COVID-19, through varied forms such as music, dance and story-telling.

Tulu Icozu Aykan, wife of the consul general of Turkey in Guangzhou and a famous mezzo-soprano, performed solos during the event. One of her songs featured the Turkish music style of the 20th century.

"The song was created from Turkish folk music. The reason why I chose this song was that I want to use this as a prelude to the 50th anniversary of the establishment of diplomatic relationships between Turkey and China," said Aykan.

Mahmoud Ali Ahmed AL-Azab, a Yemenese medical expert from Guangzhou Women and Children's Medical Center, shared his anti-pandemic experience during the event. "From my point of view, China's efforts in fighting against the pandemic have inspired the whole world," said AL-Azab.

Satoshi Okuda, the representative of Japan's Fukuoka in Guangzhou, said that Guangzhou sent a total of 300,000 masks to Fukuoka at the beginning of the pandemic outbreak, which was a godsend. Okuda noted that the friendly exchanges between Fukuoka and Guangzhou are now not only carried out offline but also through online channels.

He added that projects such as personnel and business exchanges, suspended by the pandemic, will soon start up again after the pandemic eventually subsides. 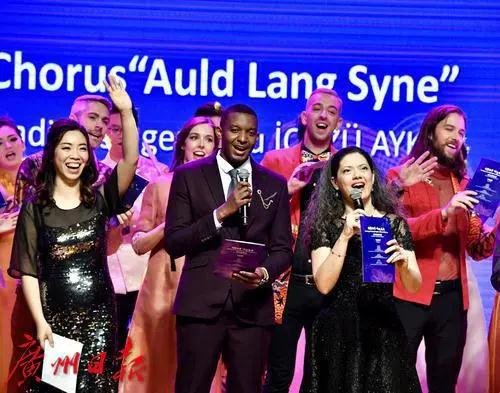 A concert with shared stories showcasing the precious friendship between China and foreign countries is held at Xinghai Concert Hall on Jan 10. [Photo/WeChat account: GZWS411665430]