Cities in the Guangdong-Hong Kong-Macao Greater Bay Area, including nine from Guangdong province, Hong Kong, and Macao, signed an agreement on the joint supervision of the regional tourism market in Guangzhou on Sept 11.

The agreement has put forward specific requirements on pushing forward the high-quality development of tourism industry in the Greater Bay Area from different levels spanning governments, market entities, and industry associations, aiming to optimize and enhance the supervision of tourism market.

Guangdong province has been a major entity in China's tourism industry. The province has clustered 3,281 travel agencies by the end of 2019, accounting for 8.42 percent of the total number in China. The operation revenue of Guangdong's tourism industry in 2019 amounted to 73.74 billion yuan ($10.87 billion), ranking second in China.

The cooperation in tourism among Hong Kong, Macao, and cities in the Pearl River Delta has been praised as joint efforts had been made in regulating illegal travel to Hong Kong and Macao.

According to the agreement, working mechanisms, such as joint conferences and exchanges, will be set up to protect the legitimate interest of both tourists and business operators in the Greater Bay Area. 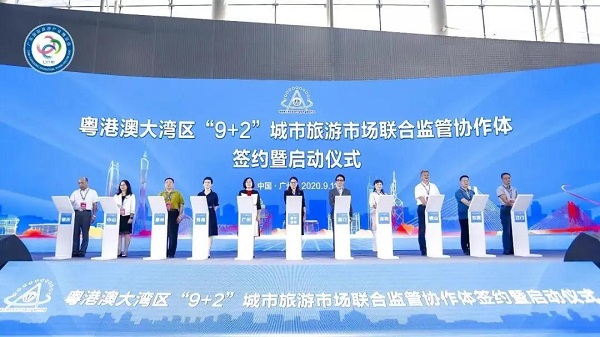 The signing ceremony of the agreement on the joint supervision of the regional tourism market by cities in the Guangdong-Hong Kong-Macao Greater Bay Area. [Photo/WeChat account: GZWS411665430]