The plaque-unveiling ceremony for the Global IPv6 Testing Center's Guangzhou laboratory and the Nansha demonstration base for full IPv6 application was held on July 30 during the 2020 IPv6 Summit.

The Global IPv6 Testing Center is currently the largest neutral third-party authority for IPv6 testing and authentication in the world. The center, being among the first batch of authorized laboratories for IPv6 testing and authentication by the IPv6 Forum, has participated in the formulation of three international certification systems, namely IPv6 Ready, IPv6 Enabled and IPv6 Education.

The laboratories of the Global IPv6 Testing Center mainly focus on the formulation of standards for the next generation internet, the establishment of test platforms, as well as research and development in areas such as consistency, interoperability, automation and performance.

The Guangzhou laboratory will carry out IPv6 testing and authentication for fields such as network equipment, websites, apps, the cloud, data centers and CDN, offering solid support for the deployment of the next generation internet in Guangzhou and even across the Guangdong-Hong Kong-Macao Greater Bay Area.

Xie Ming, Nansha's deputy director, said that Nansha has had its eye on the development of new technological industries such as artificial intelligence, Internet of Vehicles, Internet of Things and the industrial internet, as a way of offering faster and better internet infrastructure services for regional users as well as those in the countries and regions along the Belt and Road through the integrated development between IPv6 and other technologies including 5G, blockchain and AI. 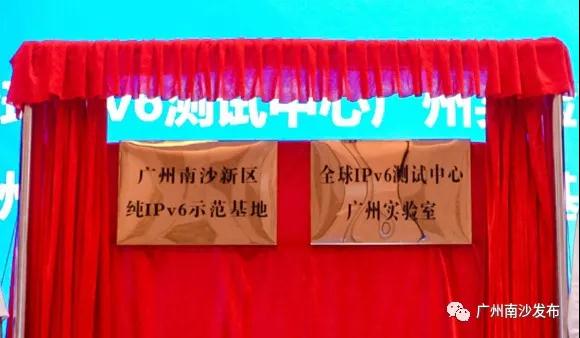 The plaques for the Guangzhou laboratory of the Global IPv6 Testing Center and Nansha demonstration base for full IPv6 application are unveiled on July 30 in Nansha. [Photo/gznsnews.com.cn]