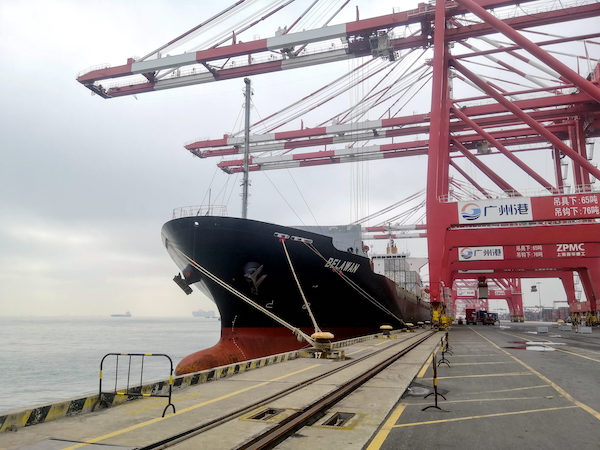 A total of five international liner ship lines departing from Guangzhou Port have been launched from Feb 27 to March 7, mainly heading to Southeast Asian countries.

The line running between South Korea and Xinsha Port of Guangzhou Port in Guangdong's Dongguan was launched on Feb 27. The line, which passes areas including Ulsan, Busan, Hong Kong, Guangzhou, and Xiamen, was expected to transport cold and dangerous goods, as well as chemicals and daily necessities.

The route heading to areas in the Middle East, loaded with 395 China-made automobiles, started operation by Japan's KLINE from Xinsha Port on March 3. The route has made contributions to the exports of China's automobile companies, providing new methods for the main engine plants in the South China area to expand their markets to areas like Africa and Europe.

The route running between Russia and Nansha Port of Guangzhou Port in Guangzhou launched on March 3. It is expected to be an excellent opportunity for Russian wood resources to reach the Guangdong market, further lowering the transportation costs and time in importing wood.

Quality fruit from Thailand can arrive in Nansha Port through the new route that is running among Thailand, Vietnam, and Nansha. It only takes three days to travel from Nansha Port to the Port of Haiphong in Vietnam and five days from Laem Chabang, Thailand to Nansha.

Another line running between Nansha, Vietnam, and Thailand is also available, as it takes four days to travel from Nansha Port to Ho Chi Minh city, Vietnam and six days from Laem Chabang to Nansha.

"These new lines can not only be positive to Guangzhou's regional economy but can also serve the whole Guangdong-Hong Kong-Macao Greater Bay Area. Currently Nansha Port can reach ports in all Southeast Asia countries, boosting the deep cooperation between the Greater Bay Area and the Association of Southeast Asian Nations (ASEAN) countries," said Song Xiaoming, deputy general manager of Guangzhou Port Group.