Region cuts red tape to get down to global business 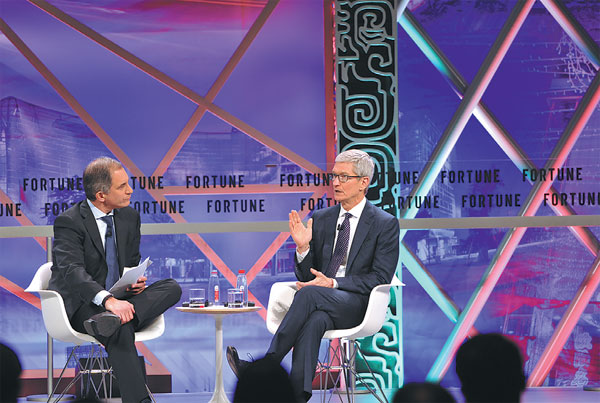 Guangzhou, the host city of the Fortune Global Forum in 2017, has introduced a strategic plan to develop emerging industries including the information technology, artificial intelligence and biomedicine.

Guangzhou has dramatically reduced its red tape so that companies can register and get up and running in just three working days compared to the previous 25 needed.

Some 2,500 administration approval procedures have been streamlined, 92 percent of all items, since the Guangdong provincial capital issued a three-year action plan in 2015 to create an internationalized and market-oriented business environment.

This has resulted in reduced operation costs for an industrial enterprise with annual business revenue exceeding 20 million yuan ($3.13 million).

Since the enactment of the plan, Guangzhou's market vitality and social creativity have been stimulated in a continual push to improve both domestic and international business. The streamlined administration and simplified approval procedures are emblematic of the changes that are underway.

Additionally, the city has also taken the lead in enhancing government efficiency and one example is the single-window system to facilitate overseas trade, which allows for much faster and cheaper cargo clearance.

Using the system, companies can declare cargo and taxes in a single submission via its website, instead of filing the same information repeatedly with different authorities.

Currently, the online cargo clearance website has 27,000 registered members and has provided services to 34,000 companies.

Tony Acciarito, president of Thermo Fisher Scientific China, the world leader in serving science, said that cultivating an environment that encourages business creation and growth involves numerous factors: from regulatory framework to professionals and transportation infrastructure. Among all others, Acciarito referred to the city's advantage in talent resources. "Guangzhou has also become a major destination for talent," he said. "An open talent pool is one of the advantages that Guangzhou can offer, and Thermo Fisher can definitely benefit from it."

Thermo Fisher signed a strategic cooperation agreement in the city in 2016 to partner up with the government in areas including biotechnology, precision medicine, food safety and environment; and the firm opened its China first precision medicine customer experience center in Guangzhou in September 2017 to reinforce its presence.

"Companies can locate any projects that are in line with market rules and legal norms in the city, regardless of their business scale, industries and sources of the investment," Wang said. They can also enjoy timely and tailored services during the site selection, construction, development and operation of their investment projects, she added.

Wang is also a senior executive of CDC Group, which is chairman of the board of the association and a leading investment and consulting firm in Guangzhou.

"Many clients have told me that they have benefited from the city's attempts to improve the business environment, which is one of the crucial factors they would like to recommend to other business people," she said. "The city's business-friendly reputation works; it helps much to convince potential investors."

Her company's new client, Can-Semi Technology, broke ground on Guangzhou's first 12-inch semiconductor wafer plant on Dec 26, 2017, which is expected to go into operation in 2019. When completed, the 7 billion yuan plant will produce 30,000 12-inch wafer chips per month, with annual sales revenue estimated at 3 billion yuan and 10 billion yuan when at full capacity.

Before construction even began, the company provided comprehensive services to CanSemi, covering areas ranging from the integration of the industry chain and policy design to financing, market development, talent recruitment and training.

"We take pride in the efficiency in the whole procedure settlement for the project," Wang said. As a result of the great efforts made in optimizing its business environment, Guangzhou has been listed as the "Best Commercial City in Chinese Mainland" five times by Forbes magazine.

It was also ranked for the first time among the 49 first-tier cities of the world in the World Urban System Rankings 2016, released by the Globalization and World Cities Research Network.