GAC Motor has become the car and mobility provider for the 2017 Fortune Global Forum currently taking place in Guangzhou, Guangdong province, a sign of the Chinese carmaker's fast growth and rising brand recognition. The Guangzhou-headquartered carmaker is providing 380 GA8 sedans, GS8 SUVs and GM8 multi-purpose vehicles for participants of the forum, including government officials, senior business executives and leading economists.

"This has demonstrated GAC Motor's innovative spirit and the world's confidence in intelligent manufacturing in China," said Yu Jun, president of GAC Motor.

"The event will help to showcase our high-end products, enhance our brand awareness worldwide and lead China's intelligent manufacturing onto the global stage," he added.

GAC Motor is the first Chinese carmaker that has a full range of C-class models. 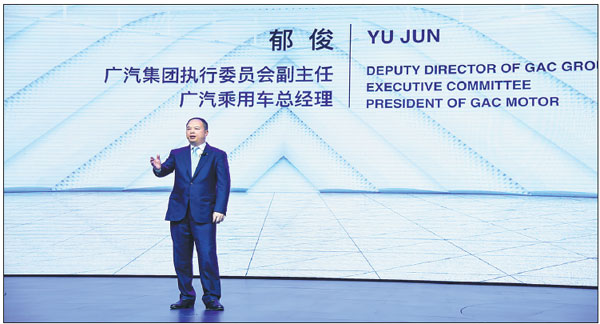 Yu Jun, president of GAC Motor, introduces the company's vision to the media during the 2017 Guangzhou auto show in November.Photos provided to China Daily

Its GA8 sedan, hailed as an example of China's high-end manufacturing, has received wide acclaim at a number of international summits, such as the Summer Davos, the G20 Summit and the China-ASEAN Exposition.

Thanks to its world-class quality, the GA8 has been a leader in Chinese-branded C-class sedans for months in a row, making GAC Motor even more confident to face foreign brands in the fiercely competitive car market.

The GS8 SUV is widely recognized as a landmark in Chinese brands' efforts to go up in the market.

It is one of the first Chinese SUVs to carry a price tag of more than 200,000 yuan ($30,250), a price that had previously been dubbed the ceiling for Chinese brands. 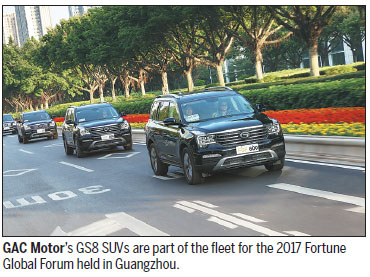 In November, thanks to an increase in transmission supplies, GAC Motor sold more than 10,000 GS8 SUVs.

That has helped the model to defeat some popular foreign brands, regaining its crown as the bestselling seven-seat SUV in China.

The GM8 is GAC Motor's first effort to tap into the high-end MPV market, which it considers to be very important to its future business growth.

Its target consumers are successful and family-oriented ones who have developed a demand for a quality family life, the carmaker said.

The MPV was unveiled last month at the Guangzhou auto show, with a pre-sale price from 180,000 to 270,000 yuan, a competitive price for consumers who have developed a taste for a higher quality MPV. It will hit the market in December.

To date, GAC Motor has released a full range of seven SUV models onto the market, including compact, mid-sized and large models, as well as an electric one.

Since its establishment, GAC Motor has targeted the medium and high-end market, and has been building up its core competitiveness by focusing on innovation, quality and international standards.

"The efforts have paid of," Yu said, adding that GAC Motor is one of the fastest growing carmakers in China, with an annual compound growth rate of 85 percent over the past six years.

It sold 468,313 cars in the first 11 months of this year, an increase of 38.2 percent year-on-year, much higher than the industry's average growth rate.

The company is also planning to expand its sales in key markets in the Middle East, Southeast Asia and Africa, with the introduction of its high-end GA8 and GS8 models to the overseas market. 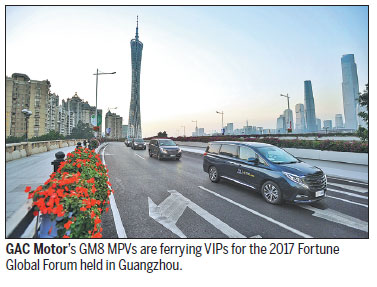