Guangzhou Automobile Group (GAC) and Italian-American automaker Fiat Chrysler are in talks to deepen their cooperation in China, according to GAC President Feng Xingya in an interview with Bloomberg on Nov 21.

In the interview, Feng said shareholders from both companies are looking at ways to "expand the scope of cooperation" in terms of models, production and sales.

China is now the largest car market in the world, and so more and more overseas auto manufacturers are seeking to ramp-up their partnerships with domestic companies to gain better access. GAC already manufactures Fiat and Jeep brands in China via their joint venture. 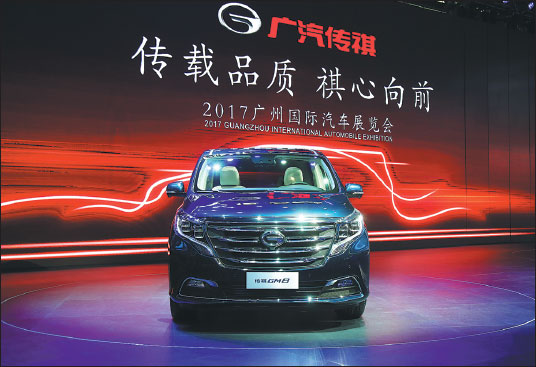 Feng said that making GAC a global player is a very important part of the company's five-year plan and that the US car market is "symbolically significant".

It was revealed earlier this week that company will begin selling its Trumpchi brand cars in the American car market by the end of 2019. Top executives at the company are said to be mulling a name change for the brand in the US due to its coincidental similarity with that of President Donald Trump.

Also placing GAC on the global stage, it was announced last month that the manufacturer would supply all vehicles for the forthcoming Fortune Global Forum to be held in Guangzhou from Dec 6 to 8.

GAC has ridden a surge in the Chinese car market in the past five years which shows no signs of fading. The company's passenger car sales rose to 370,768 in 2016 according to GAC annual report, up 97.2 percent on 2015.