More than 5,000 rowers took to the waters of the Pearl River during the annual Guangzhou International Dragon Boat Invitational Tournament held on June 11.

The tournament is an annual tradition in Guangzhou and this year drew 130 dragon boat teams from across the globe including entries from Singapore, Malaysia, Iran, Canada, and the United States. 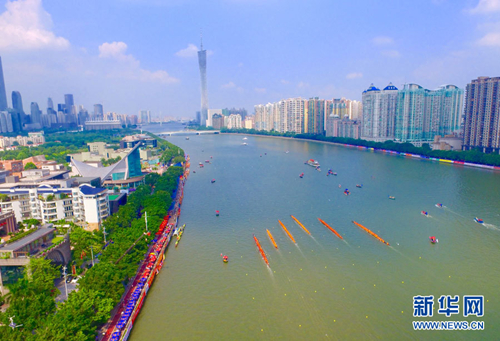 More than 100 dragon boats compete on the Pearl River on June 11. [Photo by Lan Yuanfeng/Xinhua]

After a full-day of fierce competition, the team from Lanhe town in Guangzhou's Nansha district won the championship in the men's 600-meter category for 22-person dragon boats (Open Group).

A team from Hong Kong Huangcheng Communications ranked top in the International Group, while the women's first prize went to a team from Guangdong Jiujiang Distillery Co (Open Group) and students from Foshan's Shunde Polytechnic Institute came out first in the College Group. 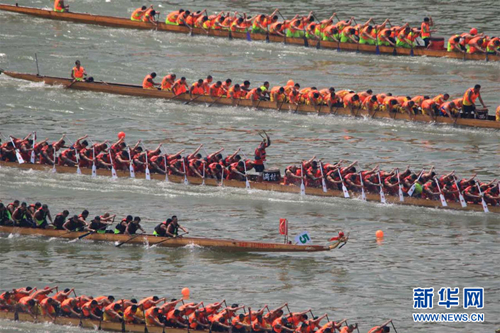 Rowers in the dragon boat race exert all their strength paddling their boats. [Photo by She Jianxin/Xinhua]

"We enjoyed the competition, although our team lost in the 600-meter preliminary contest in the morning," said New Zealand rower Michael, who was attending the contest for the first time.

"We are very tired, but we feel so happy at the same time," he said, adding that their oldest team member is 70 years old.